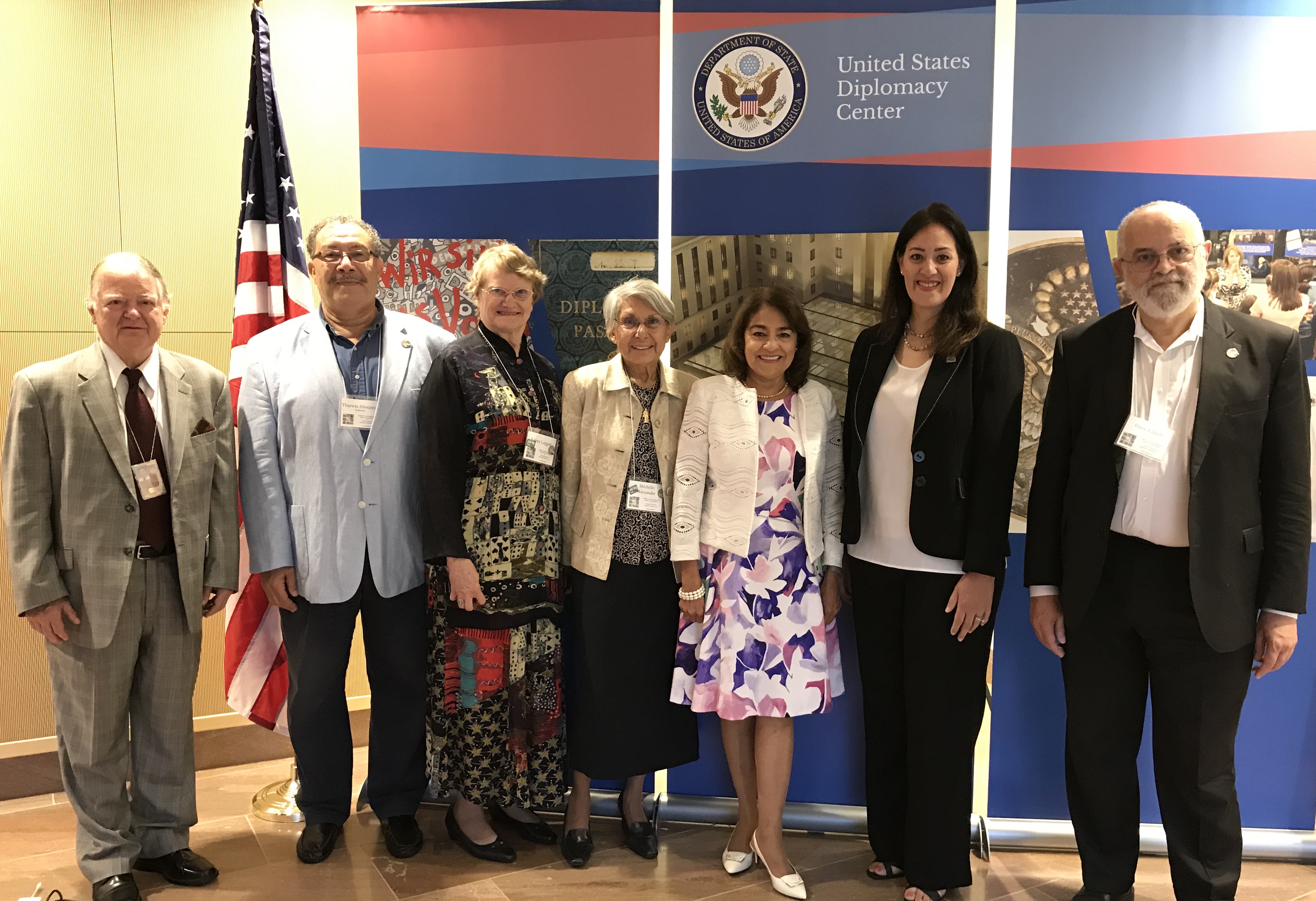 On July 23 at the Department of State’s Diplomacy Center, Ms. Heba El-Rafey, Director of Public Relations and International Communications for the Bibiliotheca Alexandrina, delivered a fascinating presentation on the magnificent new library in Alexandria, Egypt.

Before Ms. El-Rafey began her presentation, Sheila Switzer introduced Mary Kane, Director of the United States Diplomacy Center. According to Ms. Kane, John Foster Dulles said that we needed to build a center to tell the American public what diplomats do… and this is what the Diplomacy Center aspires to do. Ms. Kane also spoke of her work with Sister Cities International, of which she was president and CEO until 2018.

Next, Karen Leggett Abouraya, Co-Chair of the Baltimore Luxor Alexandria Sister City Committee, spoke briefly on the sister cities program she and her husband, Tharwat Abouraya, help organize. She then introduced our featured speaker, Heba El-Rafey.

Ms. El-Rafey first gave a brief history of the great ancient library, the famous “capital of knowledge,” which gathered scrolls from around the world and hosted great scholars. The library was founded in in the 3rd century BCE by the Ptolemaic dynasty and survived for many centuries but by 642 it no longer existed.

Many dreamed of re-creating the library for our own age. In 1988, the President of Egypt took up the project and created the GOAL – the “General Organization for Alexandria Library,” and hundreds of millions of dollars were raised. UNESCO, which embraced and supported the idea, held an architectural competition, and the winning Norwegian firm designed a structure that imitates the rising son.

The Bibliotheca Alexandrina, inaugurated in 2002, has many specialized libraries, such as the Taha Hussein library for the visually appeared, a children’s library; a young people’s library; a maps library, and a special needs unit for those with mental and physical disabilities. It is much more than a library, however — it is a cultural complex which includes 4 museums, including an antiquities museum and a manuscript museum with a conservation lab, and a planetarium science center. The Bibliotheca hosts all manner of events, from youth science fairs, book fairs, lectures from notable professors, STEM conferences, musical concerts, theatre performances, and art exhibits.

Ms. El-Rafey’s presentation left the attendees extremely impressed with the scholarly and cultural endeavors of the Bibliotheca Alexandrina, which may well surpass those of the ancient library.

We wish to extend special thanks to Karen Leggett Abouraya, Co-Chair of Baltimore Sister-City with Egypt/Luxor, for suggesting this program, and to Mary Kane, Director of the Unites States Diplomacy Center, for speaking at the event. We also thank Hilary Brandt and Matthew Pickett of the Diplomacy Center for all their assistance.

Thanks also to Anne L. Howard-Tristani for the extensive notes she took during the program.